The first implant system with a high biological performance:

Maximum reduction of the microgap at abutment-implant interface

The connection is an 11-degree cone with octagonal anti-rotation index. The conical coupling ensures the maximum reduction of the microgap at abutment-implant interface and a significant increase in the stability of the prosthetic component under load avoiding any abutment-implant micro-movements. The octagonal index ensures easy prosthetic procedures thanks to its geometry. The concave emerging profile of the prosthetic components allows for a significant increase in the amount of peri-implant connective tissue and the protection of the implant–prosthetic connection.

GTB implant screws were designed with the aid of the FEA method (Finite Element Analysis) to progressively transmit the masticatory load along the major axis of the implant by using most of all the implant apical third and not loading as much as possible the implant coronal third. This choice is driven by the need to avoid overloading the cortical bone, so as to preserve it and to maintain the hard and soft tissue levels.

All GTB’s features contribute to properly distribute the occlusal load within the implant body and to apply it progressively along the implant axis. This allows for a load reduction on the marginal bone by fully exploiting the alveolar bone which dissolves the masticatory force. In doing so, the marginal bone tissue is mechanically safeguarded.

GTB implant screws feature a cylindrical thread and a tapered body with a progressive and modified reverse buttress thread design; the variable thread section allows for an increase of compression forces and a reduction of tensile forces, according to the best loading conditions for the bone. The threads have a triangular profile, aggressive only in the apical third of the implant and a trapezoidal profile in the coronal third of the implant to minimize localized overloads due to sharp corners (typical of V-shaped threads). Finally, the thread section is defined 10° – 30° referring to the corner formed by the thread compared to the normal to the implant axis.

This solution limits thread dimensions in favour of bone tissue, makes implant insertion in bone tissue easier and limits tensile stress to the bone. Ensuring greater volume availability for the bone tissue means having the same occlusal load distributed on a larger bone volume, thus improving the biomechanics of the implant screw even in case of reduced diameters or short implants. The double-lead thread makes the insertion easier and ensures an excellent primary stability even with poor quality bones. The thread pitch is 0.6 mm.

The GTB implant features a distinguishing characteristic, namely an implant platform with a geometrically complex profile that can ensure several biomechanical and biological processes:

The implant platform is no longer an unused part of the prosthetic connection; on the contrary, now it plays an important role in the management of the marginal bone tissue and gingival connective tissue.

GTB implant screws feature a fluid discharge U-shaped notch that allows for the flow of liquids during implant screwing in the bone site. The presence of a fluid discharge notch results from the design choice to have surgical instruments for the osteotomy congruent with the length of implant screws, thus avoiding the hydrostatic compression of the clot on the apical part of the implant site. The implant apex is convex and atraumatic to safely perform mini sinus lift procedures with maximum respect of the Schneiderian membrane.

Looking at FEA results (available in the catalogue), it becomes evident how the GTB implant transmits the occlusal load to the bone mostly through its apical part, minimizing tensile stress. It is moreover important to note that short implants have a biomechanical behaviour which is virtually identical to 9.0 mm long implants with the same diameter size; on the contrary, a small increase in diameter, switching from 3.6 mm to 4.3 mm diameter implants, considerably increases the biomechanical efficiency of the GTB implant, halving the stress values transmitted to the bone tissue.

Implant screws are entirely coated – up to the fixture-abutment interface – with the OsseoGRIP treatment, namely a micro-sandblasting technique with medical grade HA (HA is removed from the implant surface after surface treatment and decontamination process) for better osteoconductivity of the titanium oxide surface, validated by 15 years of use in dental implantology. In the surface modification process an important role has been given to surface decontamination obtained through several washing steps and cold argon plasma treatment; both procedures have been validated and certified. This is an essential procedure to get a perfectly clean and sterile implant surface.

The subcrestal placement of implant screws is a surgical approach that allows both for the growth of the cortical bone above the platform, making GTB implants even more efficient from a biomechanical perspective, and for the protection of the cortical bone against overloading, especially against tensile forces. Implant screws are entirely coated – up to the fixture-abutment interface – with the OsseoGRIP treatment, namely a micro-sandblasting technique with medical grade HA (HA is removed from the implant surface after surface treatment and decontamination process) for better osteoconductivity of the titanium oxide surface, validated by 15 years of use in dental implantology. In the surface modification process an important role has been given to surface decontamination obtained through several washing steps and cold argon plasma treatment; both procedures have been validated and certified.

A dental implant that can easily be inserted in the bone. 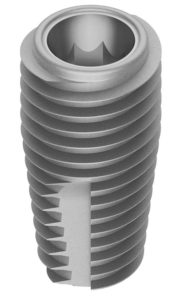